Explore a mysterious Mayan metropolis on the cheap. 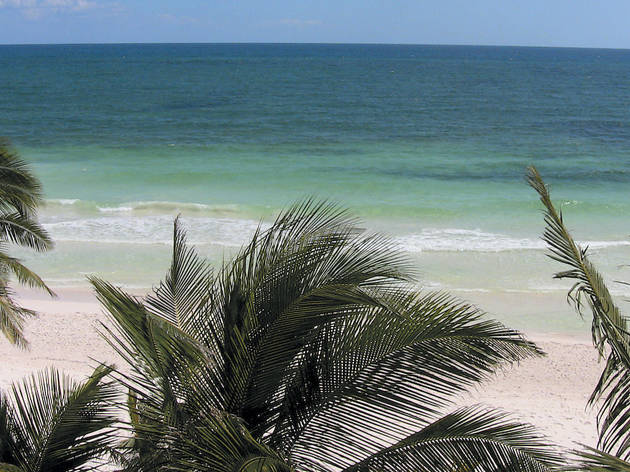 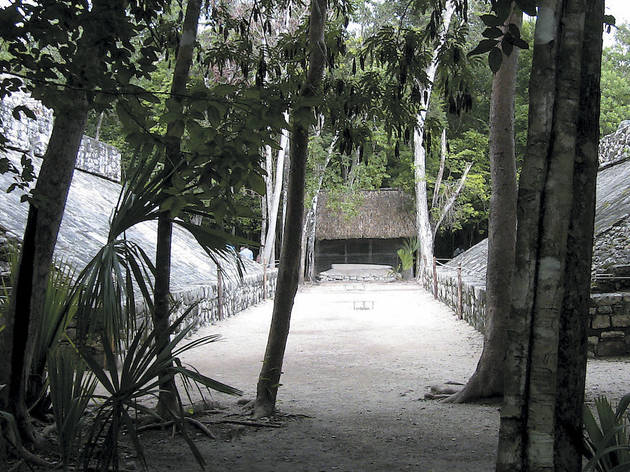 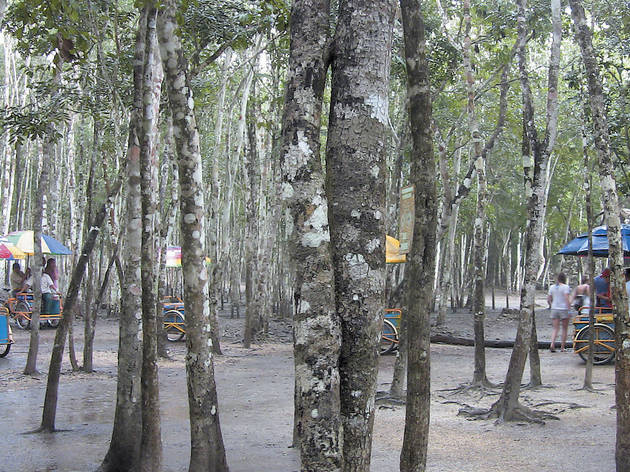 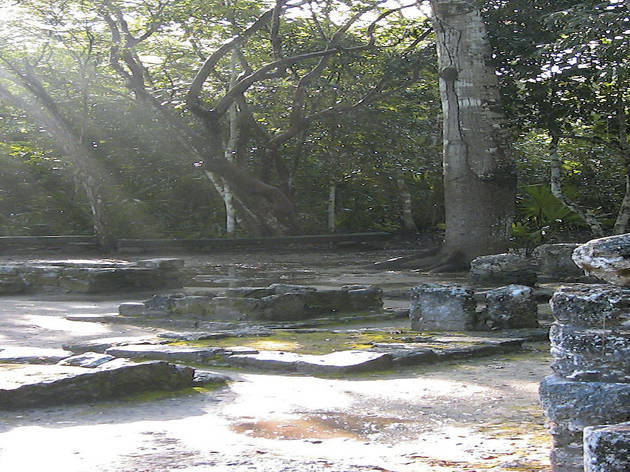 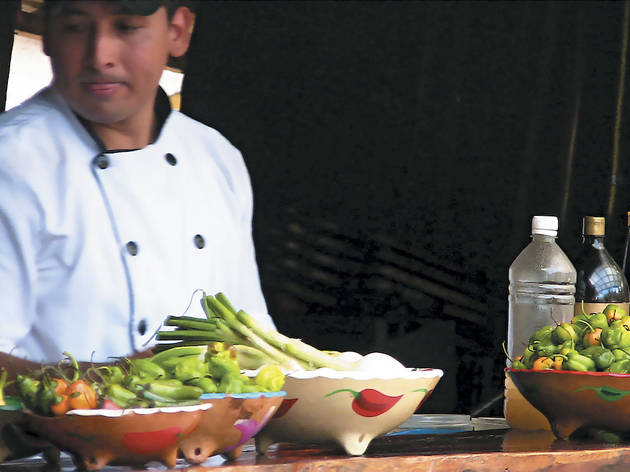 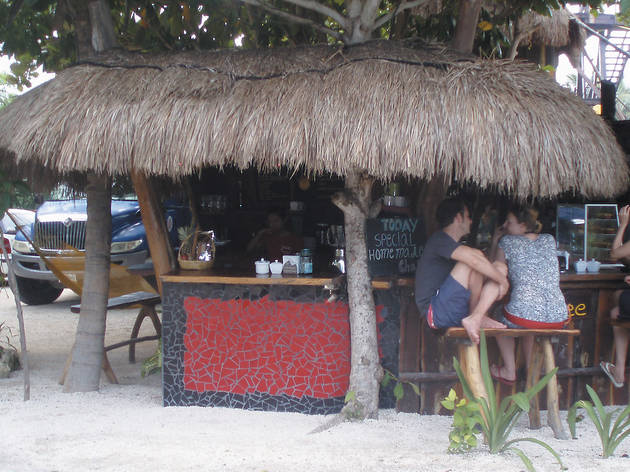 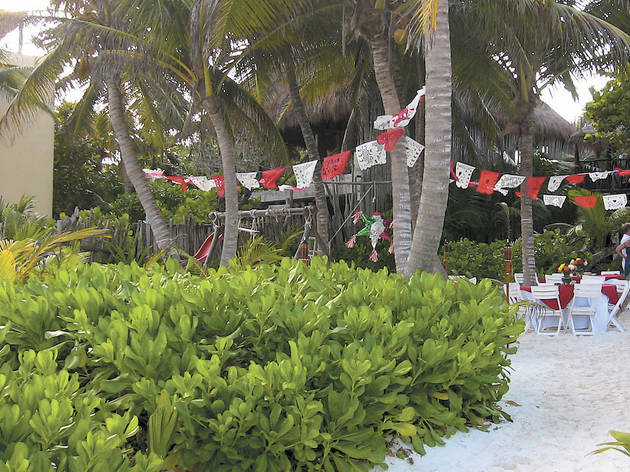 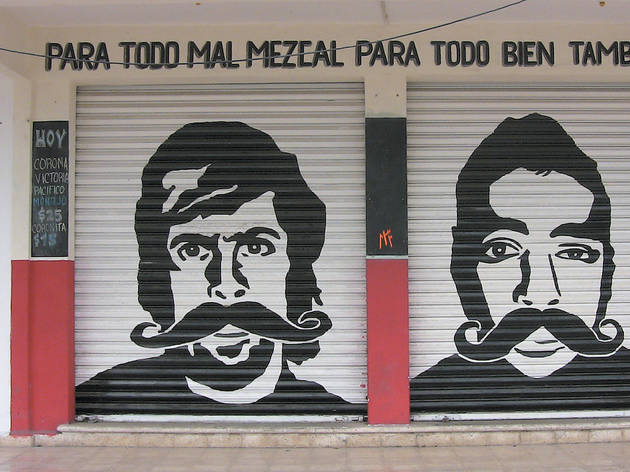 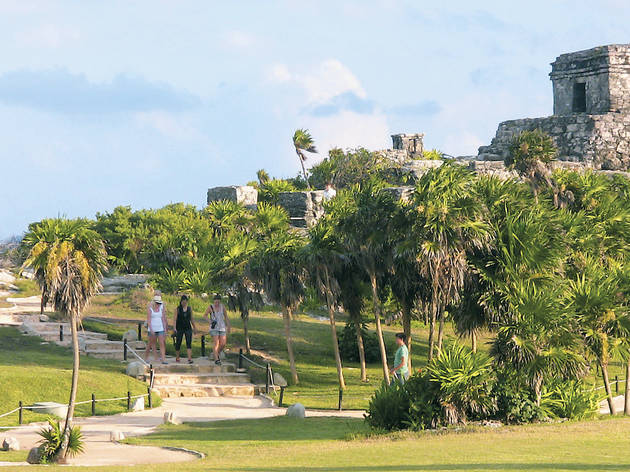 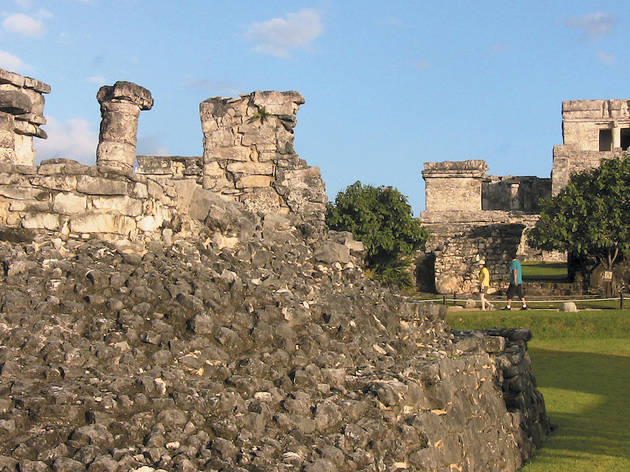 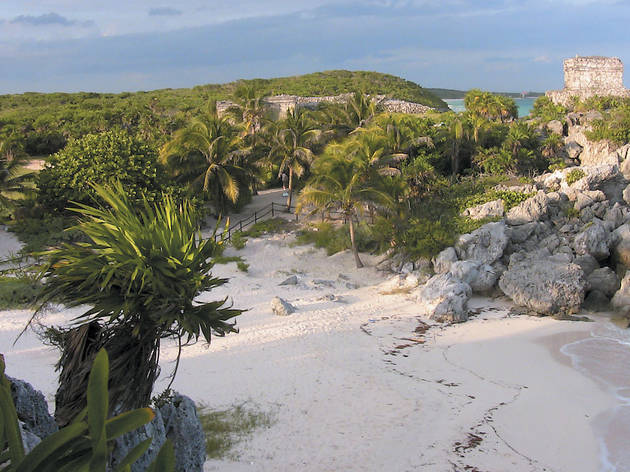 It’s hot for early November in Mexico, and I’m glad I’m wearing insect repellent as four of my favorite people and I enter the Zona Arqueologica de Cobá, the 50-square-mile remains of a city once home to at least 50,000 Mayans.

In the 15th century, as cities farther inland and on Mexico’s east coast flourished, Cobá’s influence faded. By 1527, when Francisco de Montejo arrived from Spain to conquer the Yucatán Peninsula, this once-thriving Mayan metropolis, about 30 miles from the fortified Caribbean port of Tulum, was all but deserted. But while the ruins of Cobá’s rival neighbor, Chichén Itzá, and Tulum are now neatly trimmed, their roped-off structures scattered among manicured lawns and gravel paths, Cobá largely has been reclaimed by the Yucatán jungle.

Ironically, a tree responsible for much of what we know about the Mayan people now slowly erases some of their greatest achievements. Strangler figs, whose bark was used to make paper for scrolls, push upward through cracks in Cobá’s broad staircases. Overlapping, pastel-colored lichens wrap around their bundled, slender trunks. Lush expanses of moss carpet expansive courtyards of broken limestone. The ruins here are still only partially explored and weren’t easily accessible until the 1970s.

Indeed, the foliage at Cobá is so thick that the first major structure we encounter, a weathered pyramid about 80 feet tall—dubbed “La Iglesia” in the spirit of Catholic conquest—isn’t visible until we’re nearly at its front steps.

My friends and I walk into and on top of plazas and palaces, which similarly sneak up on us as we stroll Cobá’s miles of dirt roads. (Also sneaking up on us: friendly men ferrying tourists on bicycle-powered chariots festooned with brightly colored parasols.)

Two ball courts for a soccer-like game are among Cobá’s best-preserved ruins. My buddy Tim, who activated surprisingly solid 3G data for his iPhone, reads aloud trivia about the sport, which, it’s believed, sometimes ended with a ritual death. “They’re not sure whether the captain who was sacrificed would come from the winning or losing team,” he reports.

The only person in the entire park who looks as cool as a cucumber is a tall, tan model wearing a white satin sash that reads MISS FRANCE—one of a bevy of European beauty queens being followed around by a television crew’s video cameras and boom microphones. Later, while I’m descending the dangerously steep steps of Nohoch-Mul—Cobá’s tallest pyramid at nearly 150 feet—the beauty queens pass me on their way up, posing for pictures and creating a safety hazard. When they reach the temple at the summit of the pyramid, they’ll see “La Iglesia” poking up through a canopy of bright green treetops, and it’ll take their breath away.

Get there Nonstop flights from Chicago to Cancún average $350. For the one- to two-hour drive south to Tulum Pueblo (the village) and Tulum Playa (the beach), rent a car for about $35 per day. The 30-mile drive from Tulum to Cobá (entrance fee is 51 pesos, or about $3.50) takes about an hour. Hire a taxi for about $60 round-trip, or take a one-hour bus ride for about $4.50 each way.

PLAN IT
More to do in Tulum

Where to swim
Bring a bathing suit to the ruins at Tulum: Behind El Castillo, the Mayan port’s largest structure, is a staircase down rocky bluffs to a secluded beach with sand almost as soft and white as flour.

Where to sleep
Split $4,500 among ten to 12 people for a week’s stay at Villa Sian Ka’an. This bright, comfortable home on the beach (the last photo above shows off the view) sports solar panels on the roof and Umberto Eco on the bookshelf.

Where to eat
Tart, cold cheladas pair well with the piping-hot, comically large hunks of fresh fish in the tacos at Mateo’s. The outdoor restaurant also offers tons of smoothie options.

Swoon Rooftop Restaurant in Tulum Will Make You Swoon
Easter in Tulum and Playa del Carmen: Everything You Need to Know About Semana Santa (2019)

The Spring starts with new ideas to enjoy and make the most of the holidays in Riviera Maya. We definitely...